Nicotinamide Riboside: A novel form of vitamin B3.

If you have read the blog post about research on fruit flies in Miguel’s toxicology lab you will have seen vitamin B3 derivatives mentioned. Following I would like to expand on that a little as, like many vitamins, B3 comes in several different forms and these all have different effects on our bodies. For example, a large dose of niacin causes the ‘niacin flush,’ a feeling of heat and pins and needles on the skin which some people find very uncomfortable.

Nicotinamide riboside is another form of vitamin B3 that does not cause flushing, a combination of nicotinamide and ribose into a nucleoside which is naturally found in very tiny amounts in bacteria, milk, mammals and beer. It also is naturally secreted by yeast but again the amounts are very small. In the body it is metabolized into the active form of B3 known as nicotinamide adenine dinucleotide (NAD+)

NAD+ has a very important role in cellular metabolism and energy production: Most of our cells contain tiny power plants called mitochondria (pronounced my-toe-cond-ria) which ‘burn’the food we consume and produce energy for our life functions.

Study 1 (see below) showed that nicotinamide riboside not only influences energy production but acts as substrate (building material) for the various cellular signalling reactions taking place in our cells, which are accompanied by splitting of the NAD+ molecules – this means continuous resynthesis (putting back together) of nucleotides is essential for healthy functioning.

Recently it was found that NR increases cellular NAD+ in mammalian cells (let’s hope it will include humans soon). The research mentioned earlier in Miguel’s lab on fruit flies indicated an anti-ageing effect when B3 was administered to young flies – research has also been conducted on mice, most notably by Dr. David Sinclair of Harvard with dramatic results. Injecting old mice with the new B3 changed the cells from 2 years old to 6 months in ONE WEEK! An equivalent human scale would be changing a 60 year old’s cells into 25 year old cells!Now let’s not go berserk over this, in humans the actual results will probably be much less dramatic but hopefully still worth trying.

A November 2014 edition of the ‘Cancer Cell’ journal mentioned a study that supposedly ‘Prevents DNA damage and tumour formation (a mouse study again).’ Also, there does seem to be some connection between Diabetes and Parkinson’s when we look at drug repurposing trials; I have been through quite a few cases of older diabetics that have found nicotinamide riboside taken alongside Metformin (diabetic drug) dramatically improved their blood sugar control, energy during the day and finding it easier to lose excess bodyweight. 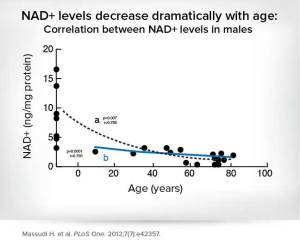 Okay, what about Parkinson’s? Does this novel B vitamin make major changes to our metabolism and sharpen energy and cognitive processes for us the way it appears to for ‘normal’ people? We must remember that Parkinson’s is not simply a metabolic disorder but also neurological. Some studies with PwP have been tried with little success; were they set up incorrectly or is this form of B3 benefiting from an exaggerated press campaign? In the UK Doctor Rosemary Fricker has had success in boosting dopaminergic neurons using vitamin B3 in the brains of mice – her study suggests that increasing the dose of B3 works up to a point – take too much and the effect disappears.

Back to nicotinamide riboside :Chromadex hold the patent on this new B3 and sell it as a food supplement called Niagen and contract it out to several competitors. It is expensive – but having said that I am being attentive to my piggy-bank and when it’s full (if ever!) I intend to try it out for myself. If any of you out there reading this have already tried out Niagen or other B3 supplements how about telling us all about it – it might save an expensive disappointment but then again it might be encouraging news.

I could write a lot more about Niagen but let’s see what happens first and maybe hear from some of you that have tried it. I am expecting nothing, so the placebo effect can be left out of this equation!