18th November 2017: The sixth annual EMRSN Steering Group forum. Later in the year than originally planned. Now we know that booking early is necessary if we want to stage the forum at a time more convenient for us and Parky people that travel a long way to see us. PD people generally find travelling in the dark a stressful experience.  Being later than usual this year the forum seemed to take an age to arrive and then whoosh! It has been and gone and slotted itself into our history at the East Midlands Research Support Network (EMRSN).  Describing the forum cannot do it justice as everything seemed to ‘click’ into place this time around but I will give it the old school try!

Big Will Randall (Nottingham group Chair) was the chairman for our get-together again and he opened the meeting. The aim of the forum was to foster an optimistic mood but it would have been wrong not to mention some friends who passed away during the last few months.  Brian Tallon was a character well known in the Parky world and Wendy Morrison was a lady of grace who will be sorely missed by many – The forum was dedicated to them. Also in my thoughts my friend Alan Wilsher who lost his wife – I felt it was a more private sentiment but have mentioned it here in print.

Let us begin: Walk with Path’s Katlyn Green introduced the Pathfinder laser beam shoe attachment which helps to stop FOG (Freezing of gait) and improves walking. I am not endorsing this device from a viewpoint of trying to drum up sales but from the experience of testing it and being impressed enough to buy it for myself. Would it help you? Try it for a month’s trial and see! Extra!! I have received the results of a study with the lasers and they proved to be more than Fifty percent effective at stopping/disrupting FOG. Any one wanting to read the study please contact me and I will e-mail the link to you.

Davide Filingeri from Loughborough via Italy impressed with a discussion of a test device for detecting PD and his matinee-idol good looks. I had a good discussion with Davide about his device and put my name on his list of PD people to test.  If you want to participate note that the welcome folder you received at the forum had a flyer from Davide enclosed.

Next up was Simon Stott from Cambridge (where he is a PD researcher by day, working for Professor Roger Barker, and the author of the best PD Blog I have ever seen by night) who opened his presentation with the answers to two questions that follow him around. Where is he from? New Zealand. But most amazing how tall is he? 6 feet 9 inches!! It was the first time I have ever seen Big Will Randall have to look up to talk to someone!

Next, Pavel Gershkovich, a Russian scientist with a fascinating life story (I would tell you but I don’t have permission from him yet), explained his preliminary work on changing apomorphine from a painful injection that lasts a little over one hour in our bodies (making it a useful emergency drug for those times when we unexpectedly freeze), into a tablet lasting up to eight hours. Two Tablets spaced apart during the day would cover our waking hours and not be painful to use. I use apomorphine injections myself so I sincerely hope he can get funding and achieve his goal with this.

Wendy Chandler from Parkinson’s UK told us about the volunteer education programme and then it was time for lunch. The lunch hour was stretched to one hour forty minutes to make it less chaotic and enable other things to be done such as seeing Sue Mills and her table loaded with gadgets to help PD people in their everyday lives. Two Reflexologists (Hava and Julie) were on hand all day (or should that be on foot?) and many attendees were treated. The Parkinson’s Choir based in Oadby near Leicester sang Christmas songs and gave a strong optimistic lift to many of the audience who said on their evaluation forms how much they enjoyed it. Well done to Jane Bursnall and Karen Gavin for keeping it going and Trevor: You’ve still got that killer voice mate!

Back to it and Simon Stott was on again (I think I will rename him ‘The Colossus from Cambridge’!)

Simon delved into possible futures for treatment and therapies and feels confident that the next generation of Parky people will not suffer the way we have. Early detection (before any symptoms become evident) allied to drugs that block progression of PD could see people live most of their lives with PD but experience no symptoms or difficulties; in effect a kind of cure!

J D Hylton also appeared again and this time concentrated on calming the mind, his experience of learning from Buddhists being key to a calm and essentially happy mind (not easy for many PD people but it can be done – I did it!). Interesting thing about the audience: Many felt J D was being too serious (‘too heavy’) when he discussed the mind, but just as many were fascinated and would have liked to hear more. 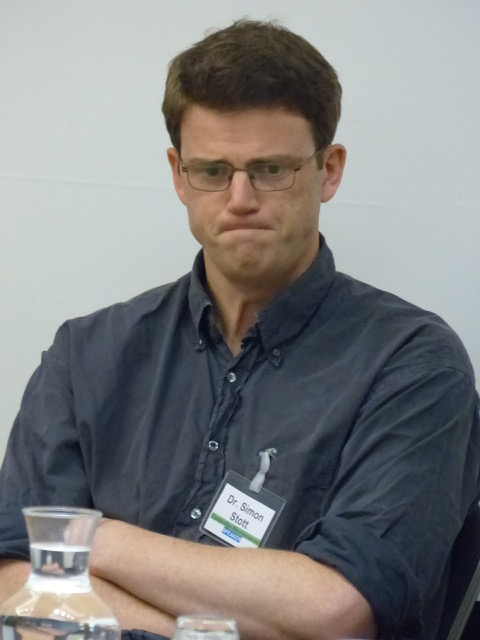 All the speakers then got together for a panel session, the audience coming up with some good questions. I think they were all answered (sorry ladies and gents, I did not record this forum).

Our last speaker up to this point appeared on the agenda as ‘mystery guest’ and was revealed to be Karen Missenden. A video clip showed the excruciating agony she went through while suffering a whole-body dystonic cramp! Now she is free of that thanks to having undergone Deep Brain Stimulation (DBS) surgery. Karen reclaimed her life and raised a tremendous amount of money for Parkinson’s UK and was the perfect example to finish the forum on, giving a final shot of optimism to us all.

If Karen was my secret surprise I was caught out myself! Big Will was closing the meeting and I was about to get up and announce that I was stepping down as chairman of the EMRSN when Kath (Steering Group) said she had a letter to read that I may find embarrassing! The letter was a well done/thank you note from Parkinson’s UK boss Steve Ford to send me on my way with a big slap on my back. Ironically, I am still here because a replacement has not been found yet – but I continue to live in hope!

Anyway, to sum up the day, I think it went very well and huge thanks go from me to a superb team of speakers and an enthusiastic audience!